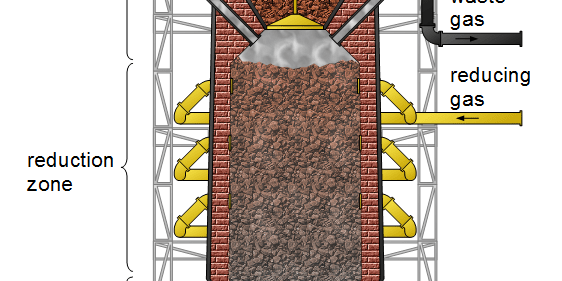 The direct reduced iron process (DRI) is becoming more and more important in the climate change debate about producing steel with as little CO2 as possible. Learn more about this process in this article.

For these reasons, the DRI-process was developed, but in terms of productivity it still stands far behind the blast furnace process. 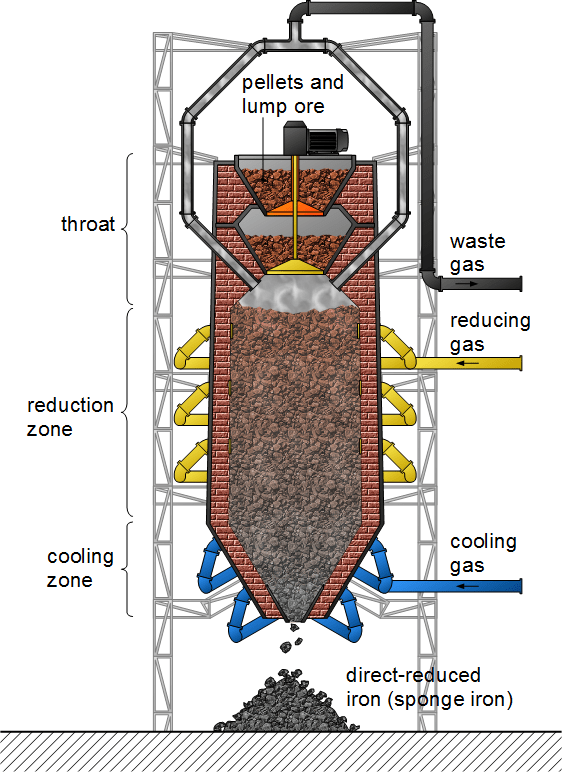 The heart of the direct reduction is the shaft furnace, which is filled from the top with lump ore and pellets. Carbon monoxide and hydrogen are used to dissolve out the oxygen in the iron ores. In contrast to the blast furnace process, however, these reduction gases do not result from the combustion of coke. Instead, these reducing agents are produced from natural gas by catalysis outside the shaft furnace.

The process gases carbon monoxide (COCO) and hydrogen (H2H2) are blown into the furnace at temperatures of approx. 1000 °C and flow through the iron ores. The reduction of iron oxides takes place according to the following chemical equations:

In contrast to the blast furnace process, the direct-reduced iron process operates at temperatures of up to 1000 °C. The iron ores are therefore not melted! This also applies to the gangue contained in the ore, which is why the iron ores used must be relatively low in gangue from the outset.

The reduction gases only dissolve oxygen from the iron ores. This causes the iron ores to crack on the surface. The appearance resembles a porous sponge, which is why the deoxidized and thus strongly ferrous iron ore is also called sponge iron

Sponge iron is a highly ferrous ore from the direct reduced iron process!

In order to prevent excessive re-oxidation of the sponge iron in the ambient air, it must be cooled down in the lower region of the shaft furnace. Carburisation as in the blast furnace process does not occur in the DRI-process, as coke is not used as a reducing agent. Thus the carbon content of the sponge iron remains relatively low at around 2 %. Slag-forming aggregates (flux) are also not used in the shaft furnace. Impurities are removed by the subsequent electric steel process. The sponge iron is melted into the actual crude steel. This process will be discussed in more detail in the next section.

In the direct-reduced iron (DRI) process, the iron ores are reduced directly to sponge iron by gaseous reducing agents!

In the electric steel process, the sponge iron obtained from the direct reduced iron process is used for crude steel making. In general, scrap is also added to this process as well as pig iron from the blast furnace process. These components are then mixed in a special oven. While the pig iron is already liquid, the sponge iron and the added scrap must be melted down.

In the electric steel process, this is done with the aid of electrodes that ignite a hot arc in the furnace (electric arc process). By turning the furnace, the slag can first be poured off and by turning it again in the other direction, the liquefied crude steel.

For smaller quantities of steel, the necessary heat of fusion can also be generated in special induction furnaces (electric induction process). Due to the relatively high oxygen content in the iron scrap (oxidized iron), the melt is oxidized, so that the melt is refined in a certain way. Aggregates also bind the undesirable substances in a slag.

After crude steel has finally been obtained from the solid iron sponge using the electric steel process, the refined after-treatment is also carried out using secondary metallurgical methods.