The production experience factors between electric arc furnace conditions and electrode consumption have been studied. Most of the derived relations seem to be based on a specific furnace type, which is why most empirical expressions are not necessarily applicable to most electric furnaces.

Various factors affecting electrode consumption in electric arc furnaces are not predictable, because many parameters are actually not measurable, such as the conductivity of the added scrap steel, the cooling efficiency of the electrode spray water, the efficiency of the manually operated oxygen lance, and so on. The conductivity and type of scrap steel are two completely different parameters, but they are more or less of the same importance for electrode consumption. This discussion will clearly show various types of electric furnaces or scrap steel types and operation-related factors, based on the measurement and evaluation of more than 15 electric furnaces using φ550mm and φ600mm electrodes to obtain an empirical relationship. In addition, these results will also create conditions for further intensive and detailed research on this topic and draw more acceptable empirical formulas. 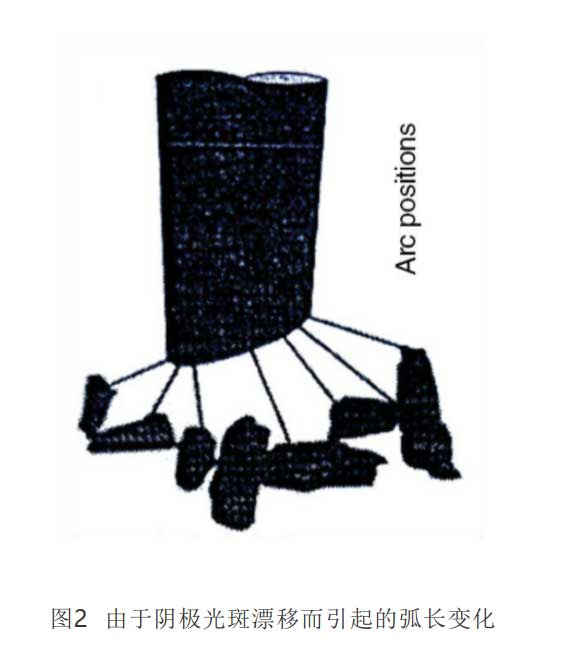 The scrap terminal effect is another factor that affects the arc length and arc stability. Due to the effect of the magnetic field, the arc is aligned along the axis of the electrode. Any deviation of the arc will result in the appearance of magnetic force from the electrodes, which tends to bring the arc back to collinear, which is suitable for any type of scrap.

Since the distribution of scrap in the furnace is randomly arranged, the graphite electrode axis and the scrap steel axis are rarely collinear. Therefore, most of the time, the arc is subject to conflicting calibration forces from the two end points of the electrode and the scrap steel, resulting in Unstable arc. Plasma jets are formed at both ends and point in different directions. As a result, the jets collide with each other and drag the conduction path to a long twisted path. When the arc length increases with the increase of the curved path, a new shortened arc can be formed on the shortest path between the electrodes. This results in the alternating lengthening and shortening of the arc shown by the sawtooth voltage waveform.

The axial force originates from the convergence phenomenon of the current flowing to the cathode point of the electrode tip, as well as the inward radial force. When the cathode spot, arc length, and arc current change rapidly, the force also changes rapidly. This force change causes the rupture of the graphite structure at the tip and causes cracks. Once a crack occurs, its propagation is much easier due to the rapid change in the magnitude and direction of the force. This may cause the disintegration of graphite, which is already close to the disintegration temperature of the graphite electrode.

These internal cracks may cause a small part of graphite fragments to fall off the tip without being exposed. This loss mainly occurs when the arc is unstable and the electrode tip surface temperature increases. (Picture 3) 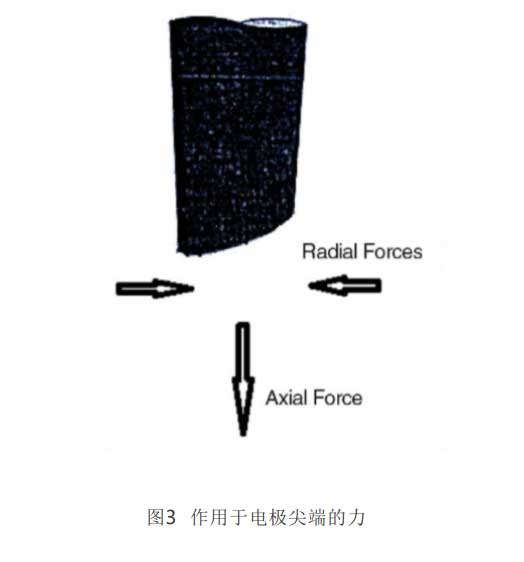 Various flue gas analysis shows that the generation of electric furnace flue gas is caused by different reactions in different stages of steel smelting. In the initial melting process, most of the flue gas generated by the arc jet “tearing” the melting charge. The flue dust is initially composed of liquid steel droplets, but depending on the flue gas temperature and atmosphere, it may quickly and rapidly oxidize to Fe2O3 or Fe3O4. According to visual observations and various studies, the densest flue gas is mainly in the melting phase. Scrap containing galvanized steel vaporizes at this stage because the boiling point of zinc is lower than 1000°C.

Since σ and Prad can be expressed as a function of temperature, and the E value can be obtained by experimental observation or analysis by measuring reactance, arc voltage, arc length, etc., the axial temperature gradient of the arc column can be known. The Lowke’s method is used to calculate the radiation of the iron-containing vapor plasma, which is used to simplify the method of estimating the arc axial temperature. Table 1 shows the arc column temperature calculated by previous studies under different iron content and σ range.

The thermal conductivity is:

Kabs is the absorption coefficient in cm-1.

When a photon moves across a temperature gradient, energy is transferred in a manner similar to heat conduction. The thermal conductivity Keff is in W/cmK.

The probability P of radiation escape or photon transmission varies with the distance from the axis. Zolloweg’s research shows the following: 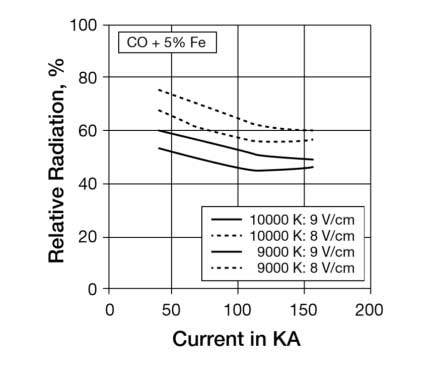 The calculations provided here are for the arc column far away from the electrode tip, assuming a cylindrical shape. Near the electrode tip where the arc column is too narrow and not cylindrical, the power loss is mainly caused by convection. The heat is transferred to the electrodes by convection. Some measurements performed by Montgomery et al. indicate that radiation accounts for approximately 40% of the arc power. Due to the error of radiation calculation and the lack of knowledge and understanding of iron content, these two factors make it impossible to measure accurate temperature. The voltage gradient can be known from the arc length measurement, and its range is usually between 7 and 9 V/cm, from which the temperature range can be calculated to be between 8,000 K and 10,000 K. 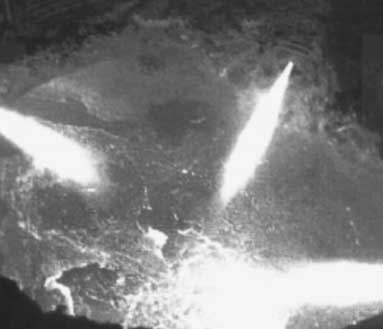 In the case of the same ambient temperature in the furnace, due to the local influence of the burner oxygen and combustion energy, the oxidation of the graphite electrode tip is strengthened.

The burner is designed to heat and cut scrap steel or charge, and is most effective in the melting stage. When the scrap steel is close to the flat bath condition after melting, its efficiency is reduced. The jet formed by the burner may be long enough to approach the electrode and heat the electrode, causing the electrode at a distance of 1 meter from the tip to overheat. Two special characteristics of the burner are crucial to the influence of the electrode: oxygen source and heat source.

In the flat molten pool state after the scrap is melted, when the burner flame or oxygen jet is more likely to approach the electrode, it is to reduce the amount of oxygen blown by the burner. At this time, the oxidation rate of the electrode is 1.5 times the normal oxidation rate.

Effect on oxidation loss near the oxygen lance electrode

This reaction is called combustion, and it is not only limited to the circumferential surface of the cylindrical electrode, but also in the entire electrode hole.

Although electrode consumption is related to many parameters, not all parameters need to be calculated using empirical relationships. This is because some parameters are not independent, but interdependent, and selecting one parameter will also represent the other parameters. In this way, through extensive observation and understanding of the performance of the electric furnace electrode, it can be seen that compared with the actual consumption of the new ultra-high power furnace, the relationship between the current-related electrode tip consumption is not satisfactory, and the early model only considers the current As the reason for the tip consumption, this needs to be improved.

Figure 7 shows the regression relationship between the electrode tip consumption rate (kg/hour) and the ratio I 2/P (square of current/power).

The measurement was done in 20 electric furnaces using φ550mm and φ600mm electrodes. In these electric furnaces, there is a good correspondence between I 2/P and electrode tip consumption per hour. However, regardless of the influence of the electrode diameter, in most cases, the current density of the average electrode tip diameter is between 30 and 35 A/cm2. Using this model to calculate the tip consumption can get an empirical relationship:

The index x ranges from 0.2 to 0.6, depending on the electrode tip angle and the type of scrap.

To calculate the electrode tip consumption based on the produced steel kg/t, you can use the standard formula to calculate:

Among them, POT = power-on time.

There is also a good correlation between electrode tip consumption rate and I 2/P. In some cases, stainless steel electric arc furnaces have high harmonics, and transformers are also a problem. Compared with similar electric arc furnaces, the electrode consumption rate is higher. This shows that the harmonic content will affect the skin effect and the actual current density, resulting in an abnormally high electrode tip consumption rate. In the presence of harmonics, near the polar center circle (PCD), the proximity effect reduces the current carrying capacity of the electrode tip. Therefore, considering the harmonic distortion THD of approximately 5% in any furnace, the proximity effect is taken into account in the formula, and the arc stability factor F1 is calculated from the standard deviation of the current and the power factor. 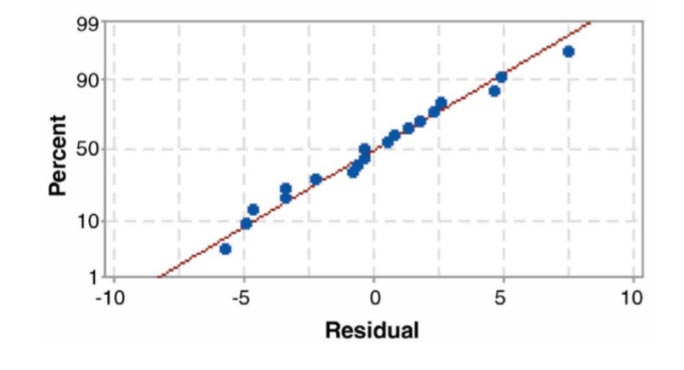 According to the empirical formula proposed here, it is possible to calculate the optimal current of the required power to obtain the minimum electrode consumption.

Calculation of side oxidation rate Rside:

V = the volume of the red hot truncated cone at the electrode end,

V’is based on the length loss and diameter loss ∆D caused by electrode tip consumption.

In a 90-ton electric arc furnace producing stainless steel in Korea, under the following operating conditions, the electrode tip consumption and sidewall oxidation were calculated, and a distance of 600mm was verified. In the case of keeping other parameters unchanged, Table 3 shows the consumption changes of the diameter φ600mm electrode and the diameter φ700mm electrode as the current increases. 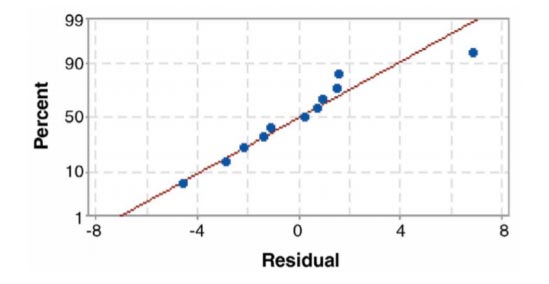 The electrode sidewall oxidation consumption (kg/t) is calculated from Rside, TTT and the weight of molten steel tapping.

This subject has conducted an in-depth study on the influence of factors such as wild wind suction speed, furnace ambient temperature, electrode water cooling and other factors. The next step of the research will refine the oxidation electrode consumption equation. The function includes the additional parameters discussed in this article, and the equation is applicable to all types of electric arc furnaces.

Translated from the January 2021 issue of “Steel Technology” in the United States.