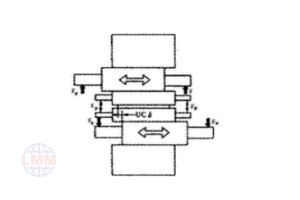 (1) Through the axial movement of the rolls, the harmful contact parts between the roll bodies by accident of the plate width are eliminated, and the stiffness of the roll gap is improved:

(3) Since it can be adjusted by two means of bending force and roll axial movement, the rolling mill has good shape control ability;

(4) Since it can be adjusted by two means of bending force and roll axial movement, the rolling mill has good shape control ability;

(5) Cylindrical rollers can be used for both work rolls and backup rolls, which reduces the grinding process and saves energy consumption.

Therefore, the six-high rolling mill has improved in terms of shape control force, control of strip edge thinning ability, an increase of reduction, and reduction of rolling functions.

2 The working principle of a six-high rolling mill

For flatness, this is a detrimental contact area, which can lead to disadvantages such as work rolls requiring an original crown, difficulty in reducing work roll diameters, ineffective roll bending, and increased inventory of spare work rolls.

The six-high rolling mill is one of the ideal advanced equipment for producing high-quality sheet products. It can not only ensure high-quality strip rolling products but also improve productivity, success rate, and energy-saving effect, expand the scope of application and improve the operating performance of the rolling mill. has obvious advantages. The domestic large-scale six-high rolling mill has been successfully widely used in industrial production, and its technical level and function have reached the level of similar foreign equipment.