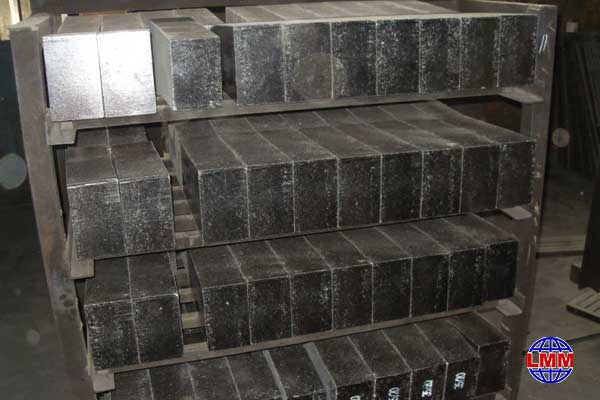 The refractory materials used in the early ladle slag line were directly combined with magnesia-chrome bricks, electrofused and then combined with high-quality alkaline bricks such as magnesia-chrome bricks. After the MgO-C brick was successfully used in the converter, the MgO-C brick was also used in the refining ladle slag line, and good results were obtained. China and Japan generally use resin-bonded MgO-C bricks with a carbon content of 12% to 20%, while Europe mostly uses asphalt-bonded MgO-C bricks, and the carbon content is generally around 10%.

The Kokura Steel Plant of Sumitomo Metal Corporation of Japan uses MgO-C bricks with MgO content of 83% and C content of 14-17% in the VAD slag line instead of directly bonded magnesia-chrome bricks. The life of the slag line is increased from 20 times to 30 times. -32 times.

Japan Sendai Iron and Steel Plant LF refining ladle, using MgO-C bricks instead of magnesia-chrome bricks, the life of the slag line has been increased from 20-25 times to 40 times, and good results have been achieved.

After research, the MgO-C brick made of the mixture of fused magnesia and sintered magnesia, plus 15% phosphorus flake graphite and a small amount of magnesium aluminum alloy as antioxidant, has a very good use effect, and the capacity is 100 tons of LF. Compared with MgO-C bricks with a C content of 18% without antioxidants, the damage rate is reduced by 20-30%, and the average erosion rate is 1.2-1.3mm/furnace.