There are three four-machine four-strand continuous casters in the second steelmaking plant of Anyang Iron and Steel Co., Ltd., two arc-shaped radii of 5250mm, and one arc-shaped

Cast billet de-square (also known as rhombohedral deformation) refers to the tangential deformation of the billet (or rectangular billet) (one pair of angles is less than 90°, and the other is large at 90°). The difference between the two diagonals of the cast slab section is often used to indicate the size of the out-of-square deformation. On the cross section of the cast slab.

The cast slab has adjacent acute and obtuse angles on the cross section, and the diagonal lengths are not equal, and they appear at the obtuse angle. It is dented, and there are cracks perpendicular to the surface of the cast slab and along the diagonal line under the skin. The length of the crack and the degree of de-squareness increase linearly relationship. There is often a depression between the obtuse angle and the crack of the cast slab, and the bulge appears between the acute angle and the crack. There are different degrees of bulging.

The hazards of cast slab falling off have the following aspects:

(2) Leaving the square and accompanied by a certain degree of bulging will cause a steel breakout accident and affect the normal production of the casting machine;

(3) Leaving the side will cause difficulty in lifting the casting billet. During the lifting process, the loose clamp will easily damage the equipment and cause safety accidents;

(4) De-square will cause the phenomenon of reheating furnace pushing steel and falling steel. The casting billet is difficult to bite into the rolling mill pass, which brings certain difficulties to rolling, and it is easy to twist and cause folding defects.

(1) Copper mould tube taper: During the drawing process, the upper shell of the mold is relatively thin. Under the action of the hydrostatic pressure of the steel, The shell is attached to the mold wall, the heat transfer effect between the shell and the mold is better, and the shell grows faster; in the lower part of the mold, when the thickness of the blank shell continues to increase to resist the static pressure of the molten steel,due to the shrinkage of the billet shell,the mold wall and the billet shell are out of contact and an air gap is generated.

The inverted taper curve of the copper pipe shown in Figure  is drawn based on the measured data after the planned shutdown of the 802 furnace (with a steel volume of 5614 tons). Figure  The taper of the copper tube basically maintains the parabolic curve, which conforms to the shrinkage law of the slab, and the slab of the mold does not fall off.

At the same time, the two-dimensional heat transfer at the corners of the mold has strict requirements on the uniformity of cooling. Figure 5shows a water jacket with rounded corners. This kind of water jacket has small water gaps at the corners. Because the narrow water gaps have relatively strict accuracy requirements, the accuracy of the corners is difficult to guarantee during the actual installation process, and the corner cooling is easy to cause unevenness , The cast slab de-square is very serious. The right-angle water jacket in Figure  has more than doubled the area of the corner water gap than the corner area of the fillet water jacket. Under the same water pressure, the flow rate increases in proportion to the area, which increases the water at the corner. The flow, relatively speaking, offsets the influence of the unevenness of the narrow water gap at the corner. 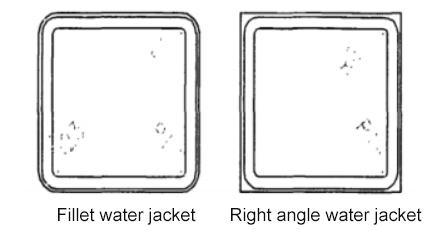 (3) Copper mould tube  water quality: Although the cooling water flow rate in the water gap of the copper mould tube is high, the flow rate of the water film along the outer wall of the copper pipe is low due to the boundary effect during the flow process. If the water hardness is high, the Ca and Mg plasma in the water will easily deposit and form scale, which will affect the heat transfer efficiency of the copper pipe. At the same time, the temperature of the cold and hot surfaces will be uneven, and even lead to excessive accumulation of heat locally, resulting in permanent deformation of the copper tube, and serious local boiling will cause permanent deformation of the mold water jacket.

2. Cooling in the second cold zone

From molten steel to slab, 80% of the molten steel is solidified in the secondary cold zone, which is the main area that aggravates the deformation of the slab. Therefore, the cooling uniformity of the secondary cooling section is equally important for the defect of square off. In actual production, the billet often deviates due to the difficulty of arc alignment and the wear of the roller table (support roller, idler roller, pull-straightening roller), etc., and the working environment of the second cold section is relatively harsh and the production of steel leaks. The impact of the accident, the deformation of the second cold spray water pipe, nozzle blockage, and falling off, to a large extent affect the uniformity of cooling in the second cold zone. At this time, if the casting slab exits the mold when there is de-square deformation, It will deteriorate rapidly in the second cold zone and even cause waste.

(1) Temperature and drawing speed: The higher the degree of superheat of molten steel, the greater the probability of falling square. The high superheated molten steel has a large heat output, which is easy to cause uneven heat flow on the section of the cast slab, which leads to the formation of detachment defects. The increase of the drawing speed will increase the heat flux density, and the high heat flux is very easy to cause the uneven heat output in the section direction of the cast slab, which will cause the uneven growth of the slab shell in different directions on the section, and induce the generation of detachment. The mismatch between the drawing speed and the degree of overheating will aggravate the cast blank and bulge. This has been confirmed in actual production.

(2）Nozzle alignment: When molten steel is injected into the mold through the nozzle of the intermediate tank, whether the position of the impact point is centered and the level of the liquid level in the mold will directly affect the heat flow distribution in the mold, and the misalignment of the nozzle will cause the billet shell The growth in the crystallizer is uneven, and the cast billet falls off.

(3) The influence of steel grade: The shrinkage rate of steel is inconsistent due to the difference in chemical composition of various steel grades. When the carbon content of steel grade is different, the shrinkage of the slab shell in the meniscus varies greatly. The easy-to-square steel Q235B has a carbon content of 0.12-0.17%. It belongs to peritectic steel. The shell line shrinks greatly. The gap between the meniscus and the inner wall of the copper tube is large and irregular, which causes the primary shell to not solidify. The de-square formation is uniform, and the shrinkage of low-carbon steel wire is greater than that of medium and high-carbon steel, so the de-square rate of low-carbon steel is greater than that of medium and high-carbon steel. The high sulfur content in carbon steel leads to better heat transfer. When the sulfur content in steel is greater than 0.03%, it is more prone to squaring, and the rate of squaring exceeding the standard is significantly increased.

The mold copper tube plays an important role in whether the cast slab is out of square. According to the actual production situation, choose a mold with a suitable taper to make it conform to the solidification and shrinkage law of the cast slab, thereby reducing the occurrence of air gaps and ensuring the casting The uniformity of the blank shell. Organize relevant professional and technical personnel to measure the new copper tubes one by one, and grasp the relevant process parameters of each copper tube in time. Before installation and use, the water gap around the mold must be measured, and the width of the water gap must be adjusted. If the copper pipe positioning pin is loose or falling off, it should be treated in time to ensure that the uneven error is less than 0.1mm; at the same time, the copper pipe and water jacket should be strictly inspected , There should be no deformation and no scaling. At the same time, improve the mold inspection management system. The replaced mold ensures that the inverted taper of each copper tube must be measured, and records are made in time and file management is carried out. If the inverted taper of the copper pipe is not suitable, replace the new copper pipe. If the copper pipe is severely deformed, once it exceeds the standard, it will be replaced no matter how long it is used. At the same time, the structure of the mold copper tube is improved, such as the use of a right-angle water jacket. In addition, pay attention to improving the cooling water. The water quality is tested and treated regularly to ensure that the hardness of the soft water used for crystallization reaches the standard. Figure

(1) Replace the severely worn support rollers, guide rollers, and pull-straightening rollers in time to ensure the normal curvature of the casting machine.

(3) Strengthen the management, inspection and maintenance of the second cold section, choose a spray pipe with good rigidity and ensure accurate arc alignment. When the spray pipe is deformed, it should be checked and replaced in time to ensure the arc-like performance of the spray pipe; the nozzle should be checked and cleaned frequently, especially in the event of a steel breakout, actively arrange for cleaning and replacement; strengthen the casting operator Accident assessment to reduce the occurrence of steel leakage accidents

(4) When the cast slab is de-squared, replace the small nozzle to appropriately reduce the drawing speed, weakening = secondary cooling strength, etc., which can reduce the degree of cast slab de-square.

Our factory focuses on the quality of raw materials, production organization, equipment operation, smelting, production preparation, steel casting and other workers, and fully implements constant speed casting. (The following table shows the percentage of constant pulling speed in each quarter in 2014) Figure

(1) Reduce the superheat of molten steel, and control the temperature of tundish molten steel at 10-20°C above the freezing point.

(2) Choose an appropriate pulling speed according to specific factors such as overheating.

(3) When the tundish nozzle is aligned with the mold, the deviation of the mold center should be reduced. If the deviation is too large, the green shell will grow.

The uneven length requires that the centering deviation between the tundish nozzle and the copper mould tube is less than 3mm.

(4) Control the composition of molten steel, especially the carbon content.