The low-carbon magnesia-carbon bricks used can be roughly divided into two categories:

① Under the conditions of use, low-carbon magnesia-carbon bricks combined with nano-carbon fibers are formed in situ. The wc =1% in this kind of brick, the service life on the VOD ladle is twice that of the traditional magnesia chrome brick;

②Nano-structured matrix low-carbon magnesia-carbon brick, wc=3%5% in the brick. In Japan, this kind of brick has been widely used in RH refining furnace as a substitute product of magnesia chrome brick, and its service life is obviously better than traditional magnesia chrome brick. 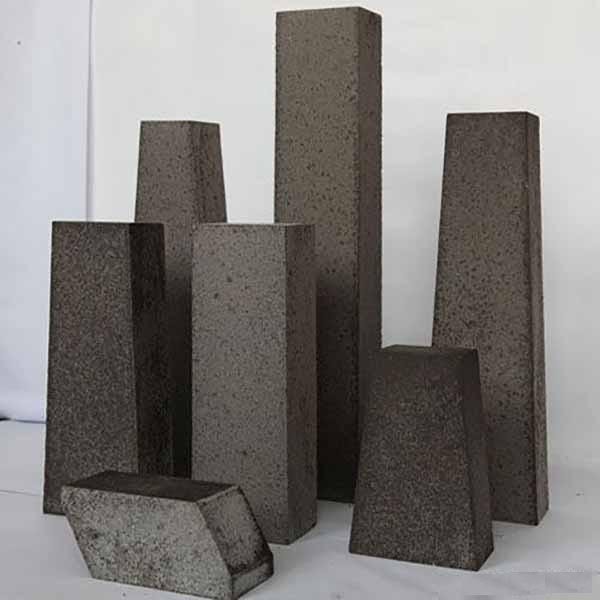 LMM engineers studied the effect of adding MgB2 to magnesia carbon refractories. It is found that when the temperature is higher than 1000 ℃, MgB2 reacts with CO to form MgO, C and B2O3, and MgO reacts with B2O3 to form mg3b2o6; When the temperature is higher than 1340 ℃, mg3b2o6 melts into liquid phase and is filled between MgO aggregate and matrix, which makes the structure of MgO-C refractory compact and is beneficial to improve the oxidation resistance of the material;

LMM engineers studied the preparation of Al4SiC4 and its effect on the oxidation resistance of magnesia carbon brick. It was found that when the addition amount of Al4SiC4 was 3 ~ 5wt%, the carbon loss decreased by 50 ~ 60wt% (1500 ℃, 6h).

Al4SiC4 can reduce the oxidized carbon and add its own C as free C to magnesia carbon brick to supplement the carbon source. In addition, Al2O3 and SiC generated by Al4SiC4 decomposition react with MgO to finally generate magnesia alumina spinel and forsterite, so as to form a protective layer on the surface of the brick to prevent further oxidation of the material.