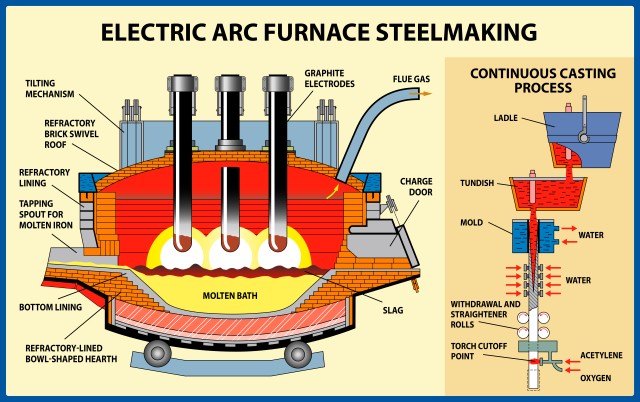 In this post, we will be talking about the history of EAF-steelmaking & the almost mystical concept of Ultra High Power Arc Furnaces (or short UHP).

The first successful and operational furnace was invented by James Burgess Readman in Edinburgh, Scotland in 1888 and patented in 1889. This was specifically for the creation of phosphorus.

Though the arc furnace came out in the 1900s, the major development has waited its time till the end of WWII. During the latest decades, the development has escalated and brought revolutionary changes to the steel industry.

While EAFs were widely used in World War II for production of alloy steels, it was only later that electric steelmaking began to expand.

also allowed them to successfully compete with the big United States steelmakers, such as Bethlehem Steel and U.S. Steel, for low-cost, carbon steel “long products” (structural steel, rod and bar, wire, and fasteners) in the U.S. market. – The Electric Arc Furnace

Since the concept of the UHP arc furnace(ultrahigh power arc furnace) emerged in the mid-60s, people have tried to build a bigger furnace with higher power and capacity.

The application of advanced technologies like dynamic compensation system and water-cooling system boosts the development vigorously.

There are several essential elements that caused the evolution: