Analysis of the plan of work roll peeling

Analysis of the plan of work roll peeling

On the second rolling mill, the semi-high-speed steel work rolls were peeling off (Figure 12a), located at a distance of 650 mm from the edge. The diameter of the work roll WR when peeling occurs is 1155mm, and there is still 30mm from the scrap diameter, and there is still a 15mm working layer that can be used. Table 4 lists all parameters. When spalling defects occur, the remaining working layer shell thickness is 30mm. In order to understand the cause of spalling, several analyses were carried out: 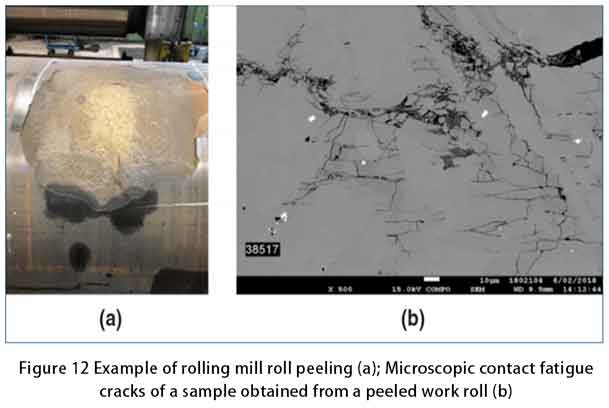 The samples taken from the spalling area were analyzed by scanning electron microscope (SEM) to evaluate the cause of breakage. This standard practice can assess whether the spalling is related to the production of the roll (whether there are defects, slag or pores), or whether it is related to the production of the rolling mill (rolling pressure overload). Inspection revealed a secondary crack in the core material, parallel to the surface of the roll. Around the secondary cracks, many small cracks parallel to the surface of the initial roll were also observed (Figure 12b). These cracks are fatigue cracks caused by the contact between the work roll and the backup roll. No defects related to casting problems were found.

Analysis of the data collected from the rolling mill shows that the total rolling tonnage of the roll is 13,000 tons. The roughing mill is mainly 7-pass rolling, sometimes 5-pass rolling, and the total number of revolutions in contact between the roll and the strip is estimated. . Some assumptions need to be made such as the average weight of the slab, the average length and the average thickness at the entrance and exit of the roughing mill. According to the figures shown in Figure 13a, it can be estimated that the number of contacts between the roll and each slab is 103 times. Based on the fact that the rollers rolled 1.3 million tons, it is estimated that 65,000 slabs were rolled, and a total of 6.7 million contacts were made. 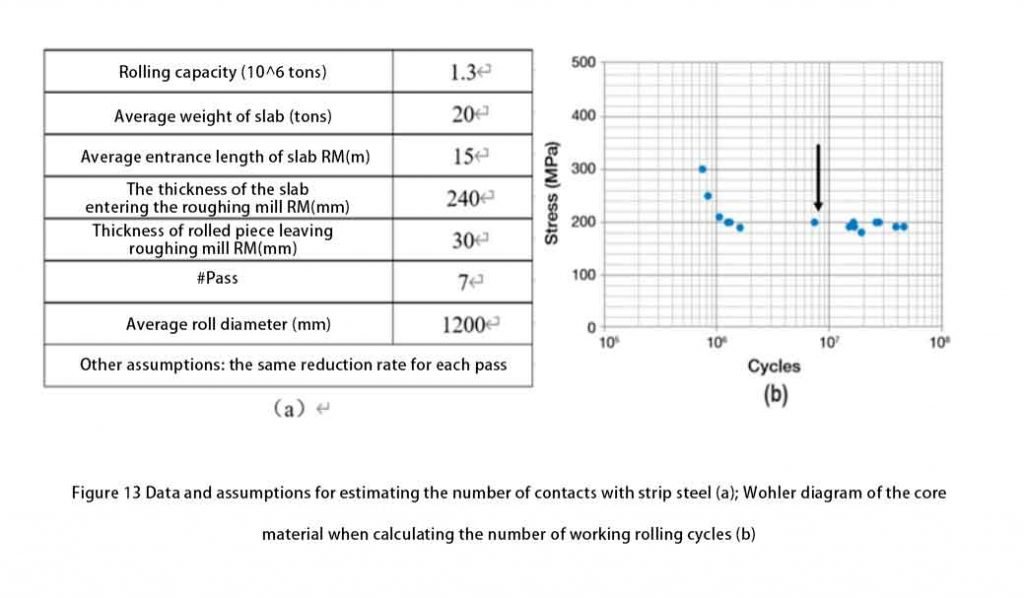 The Wohler diagram of the core material of the work roll (Figure 13b) shows that the maximum allowable stress to avoid fatigue damage in the bonding zone can be estimated. The roll life (6.7 10 6 cycles) at this stage is 180 MPa.

The support roller has a 600mm long straight chamfer (Figure 14a). In order to help the guiding of the rolled piece, a negative convexity of 200 μm is set on the work roll. The wear of the work roll and support roll is shown in Figures 14b and 14c.

Based on the roll parameters mentioned in Table 4, a 3D model was used to evaluate the stress in the work roll. The same method as rolling mill 1 was used. Simulate the 7 states in Table 3 and choose three remaining shell thicknesses:

When the Von Mises stress increases with reference to the reference state, the result is expressed in the rolling mill 1. The reference state considers the working roll shell thickness of 60mm and the support roll after grinding. The stress in this state is set to 100%. The results show that the maximum stress is located 650 mm away from the edge of the roll, which corresponds to the spalling position.

Figure 16 shows the stress in the bonding area of the work roll WR under different conditions. Similar to the first structure, reducing the thickness of the shell increases the stress in the bonding area. However, compared with rolling mill 1, the growth is relatively limited. However, when the VonMises stress is 250% (the BWWW30 curve in Figure 16), spalling occurs. It can also be seen from this figure that it is impossible to reach the roll scrap diameter (residual shell thickness 15mm) in the actual rolling mill. In fact, the Von Mises stress of the remaining shell thickness of the work roll working layer of 15mm reaches 580% in the bonding area, which is equivalent to more than twice the Von Mises stress that causes peeling.

While keeping the other parameters the same, modify the chamfer of the backing roll to evaluate its importance to the stress intensity and distribution of the bonding zone. Figure 17 shows three chamfers that have been evaluated: standard chamfer design, shortened chamfer length and double radius round chamfer. The thickness of the remaining working layer of the work roll during the evaluation of the three kinds of chamfering of the backup roll is 30mm, which is equivalent to the thickness of the working layer when the roll surface peels off. When the chamfer length of the support roll is modified, the chamfer is modified after grinding and the work roll is in a worn state for evaluation, so that the two situations can be compared to avoid inconsistent evaluation caused by incomplete support roll wear curve data.

Through the study of the peeling condition of the work roll surface, the cause of the peeling is pointed out. It is caused by the stress accumulated in the cycle life of the roll contacting the rolling piece exceeding the fatigue resistance of the bonding zone (core material). The 3D model can also optimize the work roll chamfer design to reduce the mechanical load on the bonding area and avoid peeling.

Numerical tools for estimating the material stress of the working layer shell of work rolls have proven to be useful for rolling mill operators and roll manufacturers in several situations. Develop a simplified tool to avoid repeated use of time-consuming FEM modeling, and use the finite element model to calculate various roll geometries and forces. The purpose is to facilitate users to use this tool to quickly calculate and give guidance. At present, the FEM model is used. When all the data is true and reliable, it will take a week for the first evaluation to propose optimization guidelines to the user.

In the past few decades, the competitive requirements of European steel companies have led to the use of longer rolls. The life cycle of the roll has increased, and the number of contact between the roll and the deformation zone of the cast slab has increased by 2 or even 3 times, but the core material of the work roll has not changed significantly. In addition, due to the rolling of cast slabs with higher deformation resistance and improved rolling procedures, higher stresses are generated in the rolls during the rolling process. Roll manufacturers must adapt to this change. The supplier wants to use a thicker working layer for the roughing mill work rolls to increase the amount of steel passing through the rolls. However, this approach has a non-negligible impact on the residual stress of the roll, and also has a negative impact on the core material of the work roll. The thicker the working layer shell of the work roll, the more alloying elements are needed to strengthen the core material, which will reduce its fatigue resistance.

In addition, the mechanical properties of the work roll shell material have been improved to maintain long-term use under harsh rolling conditions, but the performance of the work roll core material and bonding zone has hardly changed. In order to optimize the working conditions of the rolls and coordinate the requirements of users and suppliers, a 3D model was established to give the maximum stresses of the work rolls and backup rolls, as well as the changes in the working layer thickness of the work rolls and the stress evolution in the bonding zone Process. This model can analyze the current situation and propose a plan to reduce the mechanical load of the roll. The use of this tool shows the influence of the chamfering geometry of the backup roll on the stress distribution and size, especially in the bonding area of the work roll. Appropriate improved design can avoid fatigue and peeling of the roll under certain conditions.