Cause Analysis and Improvement Measures of Inclusions in Continuous Casting Billets 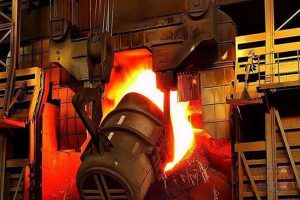 Analysis of the Causes of Inclusions in Continuous Casting Billets

2) The slag discharge of the tundish is not timely. The molten steel of ordinary carbon steel itself has a large amount of slag. To improve the metal yield, the pouring is stopped when the ladle nozzle is in a large area with slag. The untimely slag discharge of the tundish is mainly manifested in the following aspects: ① The liquid surface covering agent is difficult to absorb the inclusions of the molten steel in the tundish; ② During normal pouring, the normal liquid level of continuous casting is 850mm, and in the process of changing the ladle and waiting for steel, the middle The liquid level of the package is lowered to 550mm, and the actual depth of molten steel is 300mm. When the liquid level is less than 300mm, a vortex is formed at the upper nozzle, and a large number of inclusions flow into the crystallizer and condense in the primary blank.

3) Mixing mold oil and mold slag will form inclusions with high hardness and are difficult to remove.

1) The installation accuracy of the nozzle is poor and the use is not standardized. ①The installation of the long nozzle and the submerged nozzle is asymmetrical, which seriously erodes the inner wall of the refractory material, and creates a gap between the submerged nozzle and the quick-change nozzle, which is easy to absorb air and affects the effect of protection and pouring. ②The continuous casting machine uses a straight-type immersion nozzle with a nozzle height of 660mm. The tundish truck does not use a lifting device. When the liquid level of the mold fluctuates sharply, the immersion depth of the immersion nozzle is adjusted invisibly, and the immersion nozzle is immersed. If the depth is too deep, the high-temperature molten steel will wash the billet in the lower part of the mold, making the billet thin and easy to break out. At the same time, the inclusions are difficult to float, and the immersion depth is too shallow, which is easy to agitate the liquid level of the mold, resulting in slag entraining and affecting the quality of the steel.

2) The addition of mold residue is unreasonable. The operation of personnel is more random, the amount of mold slag added at one time is large, the liquid level of the mold is frequently exposed, and the molten steel is entrained with slag, which affects the effect of protection pouring, the broken liquid slag flows between the copper tube of the mold and the primary blank.

3) The sealing effect of the long nozzle of the large bag is poor. When installing the long nozzle, if the long nozzle and the ladle sliding nozzle are not tightly sealed, and the nozzle is not installed correctly, it will cause air inhalation and secondary oxidation of molten steel. And because the inner diameter of the long nozzle is larger than that of the sliding nozzle, the molten steel cannot fill the inner hole. At this time, a negative pressure area is formed at the top of the long nozzle, and the air is continuously sucked from the gap, resulting in the secondary oxidation of the molten steel; protection pouring use In the initial stage, the sealing effect of the nozzle is poor, the secondary oxidation of molten steel is serious, and a large number of non-metallic inclusions are formed, which are distributed along the inner arc of the billet. The low magnification analysis shows that the loose center of the cast damage is 0.5, the corner crack is 0.5, and the non-metallic inclusions are 2.0. Therefore, it is concluded that the defect of non-metallic inclusions is the main factor affecting the quality of the billet.

In the production process, the following conditions will cause the temperature of molten steel to rise: 1) During the pouring process, the number of times blocking and interruptions is large, the casting speed is low and the pouring cycle is long; 2) The capacity of the tundish, the depth of the molten pool, the flow spacing, etc. The pouring cycle is long and the length of the tundish is large. In order to avoid the low pouring temperature in the later stage, the slippage, and the formation of the dead zone of the Ⅰ and Ⅶ flow, the tundish superheat control is high. The continuous casting machine mainly produces ordinary carbon steel and low alloy steel, and the superheat degree of molten steel is generally controlled at 30-50 °C. The high temperature of molten steel will cause many hazards: 1) Ladle lining, tundish dry material, submerged nozzle, and other refractory materials are seriously eroded and pollute the molten steel; 2) The temperature difference between the inner and outer liquid cores of the primary billet is large, which increases the crack ratio of the billet and degree.