1.1 The influence of the instability of the blank section size on the finished product size

Due to the irregular change of the blank section, the filling conditions of each flight are different, resulting in changes in the micro-tension control. When the change is more serious, it will affect the ST6 material type. The size of the finished product is affected by the specification. But in fact, the influence of the blank section affects more than 50 product specifications in this production line and has little impact on other specifications.

1.2 Interaction between micro tension control and uneven heating temperature of the billet

The heating temperature is an important factor affecting the plastic deformation of the steel. It mainly affects the deformation resistance during the deformation process of the rolling piece, and also affects the section size of the rolling piece. The size has little effect and only has a small effect on the width dimension. Therefore, the main influencing factor in the control process is the increase of the rolling power after the deformation resistance increases, thereby increasing the current. When the head of a piece of steel bites into the Nth stand, the dynamic speed drop of the motor recovers, and when the steel does not enter the n+l stand, for then stand, it is equivalent to free rolling without front tension. Sampling and recording the current of the main motor at this time. When the steelhead bites the n+1 frame, the dynamic speed drop of the motor is restored and the steelhead does not enter the n+2 frame and is sampled by the control system so that the current value at this time is the currency of the tension rolling. Adjust the speed of the n frame before the steelhead enters the n+2 frame. In order to ensure the constant flow of metal seconds between racks, this process is repeated at the same rate for all racks upstream of n racks during speed regulation. If the steelhead bites +n2, the system has not completed the adjustment process. When the second steel is passed, the roll speed value of the first steel is used as the reference value to continue to adjust until the adjustment is completed. Therefore, the non-uniformity of heating temperature between the same billet and different billets will have a greater impact on the current during tension rolling, resulting in continuous adjustment of the tension and affecting the section size of the rolled piece. In principle, the setting value of micro tension control between each flight is ON/mm2, but due to the limitation of the accuracy of the control system, the micro tension setting value can be appropriately increased without affecting the size of the finished product.

1.3 Influence of impact speed compensation of the main motor of rolling mill

The roll gap and rotation speed of each stand before the rolled piece enters the rolling mill are set according to the principle of equal flow per second, but the impact speed drop of n passes at the moment when the rolled piece enters the n+l stand and bites the steel has already ended and n+l The impact speed drop of the train will cause the destruction of the second flow relationship between the n and n+l trains and cause the abnormality of the head size of the rolled piece. In order to avoid the impact of the impact speed drop, the speed is usually compensated when the rolling mill speed is set. When the steel bites back to the set speed, the size of the compensation amount and the length of the ramp time for speed recovery also affect the head size of the finished steel bite.

In bar production, the automatic control of the looper is to reduce the influence of the drawn steel between the two frames on the product size. The goal of the looper control is “no tension between the two frames”, but in actual production Tension-free rolling is only an ideal state. As long as the looper is used, tension will be caused. The main reasons are: (1) the frictional force of the looper roll; (2) the height value of the looper on the actual inspection side is not the looper. The highest value causes the tension of the pull-up roll to the rolling stock. In fact, the sound of the second cause can be reduced by careful manipulation. In production, we analyzed the principle of looper control and obtained the size defects of the head and tail of the round steel.

The looper control principle: the actual t of the looper height follows the set amount of the looper height. When the feedback amount of the looper scanner is not equal to the set, adjust the speed of the motor and the height of the looper will also change until the feedback amount is consistent with the setting. Thereby effectively eliminating the tension between the frames. However, due to the mismatch between the stroke of the lifting roller and the height of the pressing roller in the field production, the formed stroke is approximately a triangle rather than a smooth arc, and the loop scanner cannot find the highest point of the loop in the loop. The steel drawn in the device is reflected in the finished product size, “the head and tail are fat, and the middle is thin”.

1.5 The influence of the material of the rolled piece

During down rolling, the groove bottom has a certain thermal crown due to the thermal expansion. When a rolling accident occurs or the rolling is stopped for a long time, the groove is completely cooled, and the outlet section of each pass will change due to the rolling height. large and the coefficient of friction changes. The size of the finished product is abnormal because the incoming material is too large. This is related to the cooling effect of the rolls. 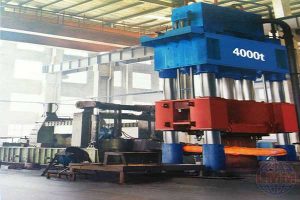 According to the above analysis of the reasons affecting the size fluctuation of the rolled piece, the following measures and control methods were mainly adopted in the actual production process, and the size of the finished product was effectively controlled.

2.1 The section size of the billet is fixed and heated evenly

The section size of the blank is fixed and the heating is uniform, which can effectively ensure the size of the material between the frames using the emblem tension control.

Under the premise of stable rolling, set the micro tension as small as possible.

Under the premise of not affecting the size of the steelhead of the finished product, it adopts a smaller impact speed drop compensation and a faster recovery time.

When changing the steel grade, pay attention to the adjustment of the material type.

2.6 Modify the cooling method of the roll

Modify the cooling method of the roll, after a long period of stopping rolling, the set height of the looper should be properly adjusted when rolling the first steel.

The experimental data were processed to reveal the internal relationship between the deformation temperature and strain rate, as well as the grain size and the Z value of the processing parameter. The parameters were fitted and calculated, and the plastic strain constitutive equation of medium carbon steel was constructed. A mathematical model for microstructural evolution of carbon steel. With the help of the secondary development of finite element simulation software ABAQUS and its subprogram VUSDFLD, a multi-condition coupled finite element model was established and simulated for the continuous rolling process of medium carbon steel. The temperature distribution and microstructure evolution process were studied and analyzed.

(2) Based on the theory of ultra-fine grains based on the principle of large deformation at low temperature, for the purpose of introducing large plastic strain accumulation into the core of the rolled piece, comprehensively considering the cross-sectional shape, geometric size, and mechanical properties of the final product, it is suitable for the production of ultra-fine grains. Exploring and developing the pass system of the high-strength medium-carbon steel large bar with granular structure.

The secondary development of ABAQUS and its subprogram VUSDFLD, the establishment and simulation of multi-condition coupled finite element models such as strain, deformation temperature, and strain rate in the continuous rolling process of the bar, research and analysis of the strain distribution of the rolling stock in the continuous rolling process, Temperature distribution and microstructure evolution process. There are two different microstructure evolution processes in medium carbon steel, dynamic recovery type, and dynamic recrystallization type. The former occurs under high Z deformation conditions, while the latter occurs under low Z deformation conditions; dynamic recovery is a continuous dynamic recrystallization process. During the crystallization process, ultra-fine ferrite grains smaller than 1 μm can be prepared. It provides a theoretical basis for the preparation of ferrite ultrafine grain structure. The constitutive equation of plastic deformation and the mathematical model of microstructure evolution of medium carbon steel is constructed, and the establishment and analysis of the finite element model during continuous bar rolling provides data reference. Based on traditional pass design theory and non-traditional pass design research conducted by predecessors, a flat-convex elliptical/circular pass system is proposed. The pass system specifically solves the problem that the M-shaped pass system introduces insufficient accumulation of plastic strain to the core of large bars and deflection during rolling and tandem rolling. The flat-convex elliptical/circular pass system can introduce a large accumulated plastic strain of more than 5.0 to the core of large medium carbon steel bars, and effectively achieve ultra-fine microscopic ferrite grains under high Z value machining conditions. And the results are consistent with the results of the thermal simulation compression experiment of medium carbon steel, and the two verify each other, which proves the correctness of using this new rolling process to produce high-strength medium carbon steel large bars with ultra-fine grain structure.