Effect of ladle-lining refractory on non-metallic inclusions in steel 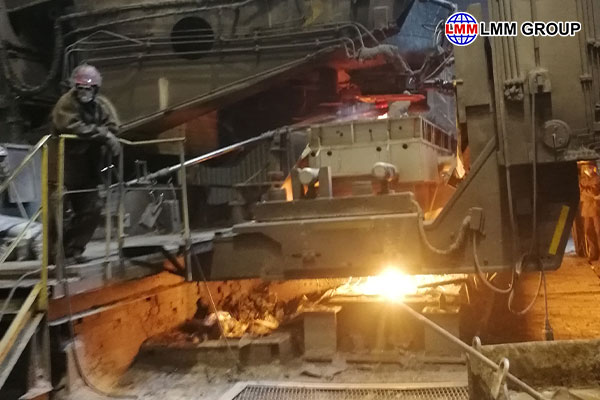 Seconclary refining is an important turning point in the control of nonmetallic inclusions in steel during the steelmaking process. The ladle-lining refractory are always confronted with severe physiochemical reactions during the whole secondary refining process, which leads to the introduction of inclusions in the molten steel and resulting in less than expected refining results. The interface reaction between ladle-lining refractories and the molten steel and introduce the resulting influences on the formation of inclusions was focused, and it was found that the ladle lining refractory material will affect the morphology, composition and physical and chemical properties of the inclusions in the steel. It is possible not only to introduce inclusions into the steel, but also to absorb and remove them. It is proposed that the future refractory materials for ladle lining should be given more development direction for the purification of molten steel and other functional indicators.

1.1 Influence of MgO-based refractories on non-metallic inclusions in steel

Metal aluminum has the advantages of low price, strong oxygen affinity and fast deoxidation speed, and is a very popular deoxidizer. When using aluminum for deoxidation, the total oxygen content in the steel can be controlled at a very low level. Therefore, aluminum is generally used as a deoxidizer for steels that require a higher total oxygen content in the steel. Typical representative steels include bearing steel and pipeline steel, IF steel, etc. A lot of research has been carried out on the effect of MgO-based ladle lining refractories on inclusions in aluminum deoxidized steel.

When Harada A, Brabie V and Jansson S studied the reaction mechanism between MgO-C refractory and aluminum killed steel, they found that not only MgO and MgO·Al2O3 inclusions appeared in the steel without any magnesium addition, Moreover, a thin layer of magnesia-aluminum spinel is formed at the interface between the MgO-C refractory and the molten steel. MgO-C refractory material dissolves magnesium in steel by reducing its own MgO through carbon and reacts with dissolved aluminum in steel to form magnesium-aluminum spinel inclusions, see formula (1) and formula (2).

The reaction with the reduction of its own MgO with carbon to dissolve magnesium in the steel will vary in the distribution of elements formed on the surface of the refractory. The element distribution at the interface of MgO-C refractory after reaction with molten steel is shown in Figure 1. It can be seen that a magnesium-aluminum spinel layer is formed at the reaction interface after the displacement reaction between the dissolved aluminum in the steel and the MgO in the refractory (Fig. 1(a)). However, after the MgO-C refractory dissolves magnesium into the steel by reducing MgO by its own carbon, it is found that there is no magnesia-aluminum spinel layer at the interface between the refractory and the molten steel (Fig. 1(b)). The chemical composition changes of inclusions in steel are shown in Fig. 2 [41]. Before the start of the test, the inclusions in the steel were mainly Al2O3 inclusions formed after aluminum deoxidation. With the prolongation of the reaction time, the mass fraction of MgO in the inclusions gradually increased. When the reaction time exceeds 3.5 min, the types of inclusions in the steel are mainly MgO·Al2O3. 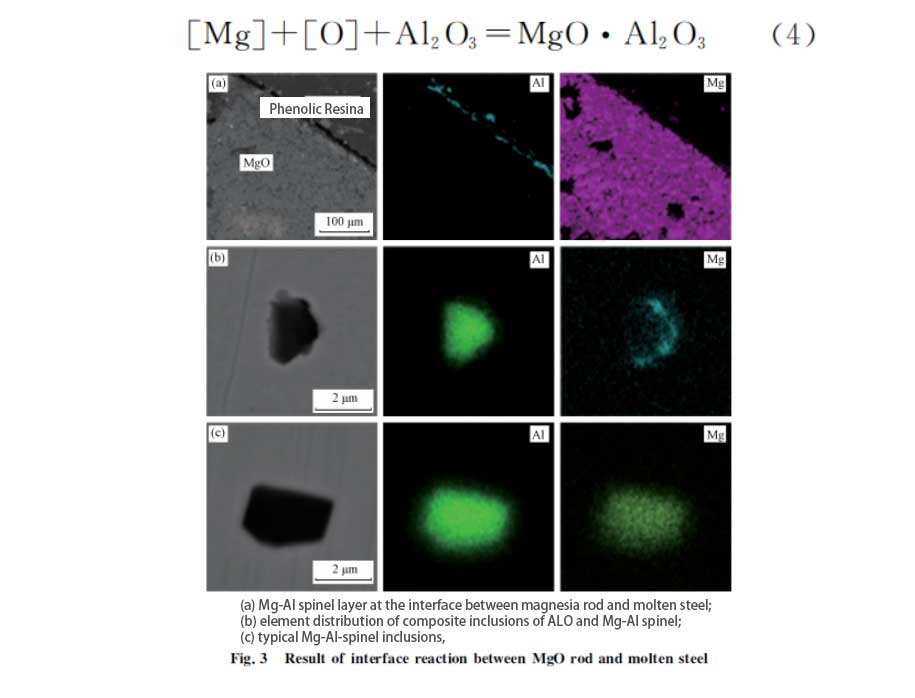 To sum up, the ability of MgO-based refractories to dissolve magnesium in steel is stronger than that of refining slag, and it will promote the transformation of Al2O3 inclusions in steel into MgO·Al2O3 inclusions.

For special-purpose medium and high carbon long products, such as cord steel, cutting wire steel, spring steel, etc. In order to avoid wire breakage caused by Al2O3 inclusions in the later cold drawing process, silicon-manganese composite deoxidation is generally used in the production process to control the shape of the inclusions and make them have better plasticity. DENG Z investigated the independent effect of MgO refractory on inclusions in silico-manganese deoxidized steel. The test results show that with the increase of the reaction time, the melting points of the original SiO2-Al2O3-MnO and SiO2-Al2O3-CaO inclusions in the silicon-manganese deoxidized steel will decrease, and finally stabilize below 1 500 ℃, as shown in the figure 5 shown.

1.2 Influence of magnesium-aluminum refractories on non-metallic inclusions in steel

The research in the literature shows that the magnesium-aluminum refractory will undergo a displacement reaction with the dissolved manganese in the aluminum-killed medium-manganese steel (equation (5)), and a (Mn, Mg)O·Al2O3 layer will be formed at the refractory-steel liquid interface. , As the reaction time increases, the erosion layer becomes thicker and thicker, and the manganese element slowly diffuses from the edge of the refractory to the center. As shown in Figure 6, when the interfacial metamorphic layer is washed by molten steel, it will peel off from the refractory matrix and become the source of (Mn,Mg)O·Al2O3 inclusions in the molten steel. The typical (Mn,Mg)O· Al2O3 inclusions are shown in Figure 7. 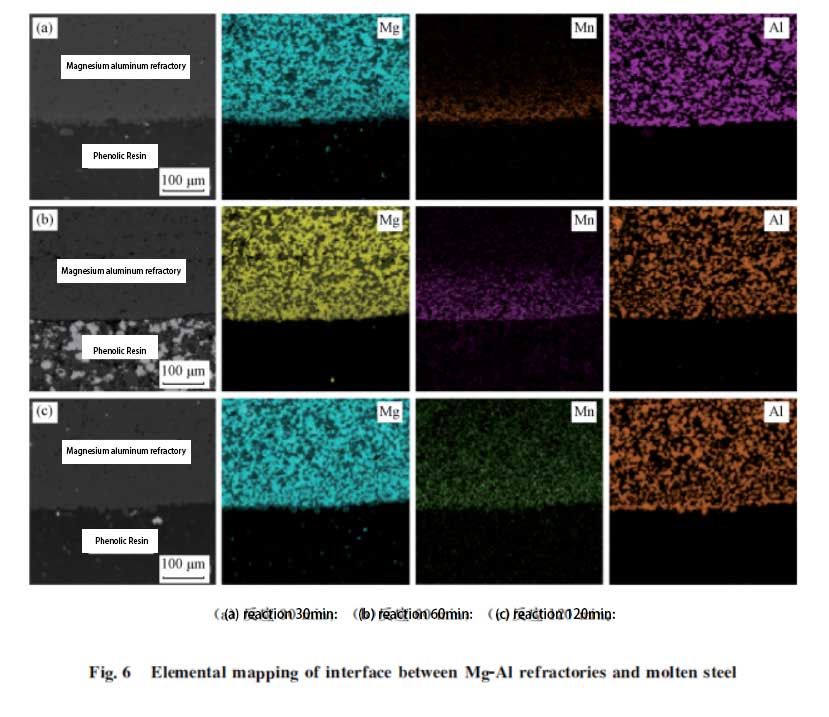 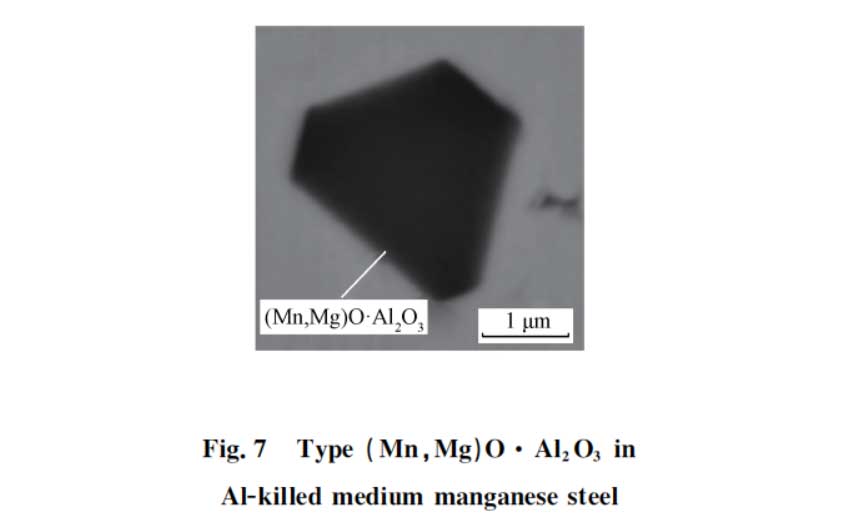 In summary, although magnesia-aluminum refractories have little effect on inclusions in Al-deoxidized low-alloy steels. However, a relatively strong interfacial reaction occurs with the aluminum-killed medium-manganese steel, and the morphology and composition of the inclusions in the steel are affected.

It was found when studying the interaction of magnesia-aluminum refractories with 95Cr cutting wire steel. The magnesia-aluminum refractory has a certain removal effect on the inclusions in the steel, and can distribute the melting point of most of the inclusions in the cutting wire steel in the low melting point region of 1 300 ℃. As shown in Figure 9 . 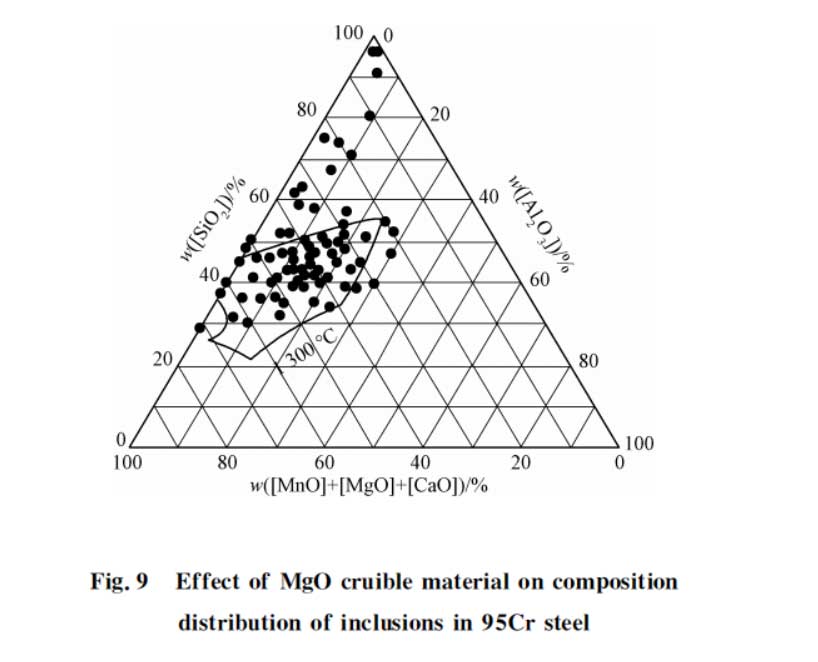 The current mainstream refractories for ladle lining meet the service cycle requirements of the current refining technology. However, there are still many problems in its own structure, high temperature service performance and harmless treatment of inclusions in steel. Therefore, the new type of refractory for ladle lining should also play a role in purifying molten steel while having stable high-temperature service performance.

With the deepening of the research on the interfacial reaction between refractories and molten steel, it was found that CaO-based refractories [20, 22, 56] have the effect of modification and even adsorption and removal of Al2O3, SiO2 inclusions and phosphorus and sulfur elements in steel. For example, Al2O3 inclusions that are unfavorable to the properties of steel, free CaO and Al2O3 at the refining temperature will form low-melting complexes Ca12Al14O33 (C12A7) and Ca3Al2O6 (C3A) [56], see equations (6) and (7), It is liquid at the refining temperature (1 600-1 700 ℃). Liquid inclusions are not only easier to aggregate and grow at the refining temperature, increasing the probability of floating removal, but also reducing the probability of nozzle blockage. However, the hydration of CaO limits the promotion of CaO-based refractories in industrial production.

The author’s research group abandoned the previous idea based on mechanical mixing of natural raw materials, and systematically studied CA6 materials from the perspective of composition regulation and structure matching. As a ladle lining refractory material, CA6 has several advantages: high melting point (1 875 ℃) and good stability under high temperature reducing atmosphere. High resistance to strong alkali slag and low wettability with molten metal. Does not react chemically with molten steel. However, due to the principle of CA6 sub-regulation, the preparation of dense CA6 refractories (with a density of 3.10 g/cm3) was achieved for the first time. On this basis, two kinds of CaO-MgO-Al2O3 (CMA) ternary functional raw materials were synthesized through the coordination and assembly of M-based blocks (magnepenite-based blocks) and S-based blocks (spinel-based blocks), namely CaMg2Al16O27 (CM2A8) and Ca2Mg2Al28O46 (C2M2A14) (density 3.66 g/cm3 and 3.71 g/cm3, respectively). This series of materials has a stable structure and can solve the hydration problem of traditional CaO-containing refractories.

In the laboratory of the author’s research group, the CMA material (C2M2A14) and the corundum-magnesium-aluminum spinel material were subjected to slag erosion (basicity 3.2) comparative tests. The results show that the two materials are eroded by high basicity slag for 3 h at the same temperature (1 550 ℃), and the results show that the slag thickness of the two materials is significantly different. Among them, the C2M2A14 slag intrusion layer is only a thin 179 μm, while the thickness of the corundum-magnesium aluminum spinel material slag intrusion layer is as high as 406 μm. And the composition of the slag intrusion layer is also different. The C2M2A14 slag intrusion layer is composed of dense CA and CA2, and has no slag composition, which effectively inhibits the erosion of the slag. The corundum-magnesium-aluminum spinel material slag layer contains more slag components besides CA and CA2 components. With the extension of time, the slag will further erode the refractory matrix, as shown in Figure 10.

In addition, the effects of CMA series materials and corundum-magnesium aluminum spinel materials on inclusions in aluminum deoxidized steel were further compared with the addition of refining slag. The results show that when the test time is controlled within 40 min, the inclusions in the molten steel using CMA material are mainly MgO·Al2O3 with a size of less than 5 μm. In the molten steel using corundum-magnesium-aluminum spinel material, there are more MgO·Al2O3 inclusions wrapped by MnS, and their size also increases. This shows that within the actual refining time (generally no more than 40 min), the CMA material has strong slag resistance and exhibits low wettability with molten metal, and will not introduce CaO-containing inclusions into the steel. At the same time, it also has an adsorption effect on the sulfur element in the steel, avoiding the precipitation of sulfide in the later solidification process.

In order to explore the influence of CMA material slag on the inclusions in the steel after invading the metamorphic layer, the test time was extended. When the test time increased to 50 min, the thickness of the eroded layer of the CMA material was stable at about 150 μm, and low-melting CaO-MgO-Al2O3 composite inclusions appeared in the steel, and the size was mainly controlled within 1-4 μm. This shows that with the further erosion of the slag, a transitional protective layer with better high temperature performance will be formed between the CMA material and the slag, which hinders the further erosion of the slag. At the same time, the CMA material will release Ca12Al14O33 (C12A7) through the erosion reaction of the slag, and modify the MgO·Al2O3 inclusions in the steel into CaO-MgO-Al2O3 composite inclusions with small size and low melting point. Play a refining slag effect.

The successful development of CMA materials provides new ideas for the development of refractory materials in the future. The author’s research group has cooperated with refractory material companies to carry out industrial production and industrialized trials in some steel plants. In the near future, the new functional ladle lining refractories represented by CMA are expected to provide stronger support for advanced refining technology and jointly promote the localization of high-quality steel.

(3) In the future, refractory materials for ladle lining should break the traditional research and development thinking, and should not be limited to prolonging the service life. More consideration should be given to giving them functionality under the premise of stable service performance and no pollution of molten steel. The inclusions and impurity elements are removed or harmless. The successful development of CMA material provides new ideas for the development of refractory materials for ladle lining in the future.