In view of the large-area spalling accidents of a cold rolling work roll in a production line, in order to study the reasons for its failure, we conducted a more in-depth study from the perspectives of the spalling surface fracture observation, chemical composition, working layer structure, hardened layer depth and crack propagation Analysis and research. The results show that the large-area spalling failure of the roll is caused by fatigue crack propagation, and the source of the crack is the roll surface crack caused by abnormal indentation during the rolling process. Finally, in view of the problem of how to prevent the malignant accident of roll surface peeling, corresponding suggestions were put forward from the three perspectives of roll use, maintenance, and design and manufacturing to ensure that similar incidents did not occur again in the near future.

In the cold rolling process, the hot-rolled thick material is designed to be rolled into a thinner product by the large rolling force of the roller according to a certain amount of deformation. In the cold rolling production process, the roll is very important. The roll is an important tool that directly contacts the strip and participates in rolling deformation in the rolling production. The surface quality of the roll and the stability during use have a direct impact on high-efficiency and high-quality production. During the rolling process, the rolls are in a complex state of stress and need to withstand extremely high rolling forces, the shear stresses of the contact between the rolls, and the friction generated during the strip rolling deformation process. In the rolling process, damage and failure of rolls are common problems. Wear, cracks and spalling are common failure modes of cold rolls [1-2], among which spalling is a very serious one, which will directly lead to the early scrapping of the rolls. At the same time, it directly leads to strip steel becoming a waste product, and in severe cases, it can also lead to strip-breaking and pile-up accidents during the cold rolling process. The cause of roll spalling is related to many factors, including roll manufacturing quality, rolling load, roll grinding maintenance, and sudden rolling accidents. Divided by the form of spalling, the spalling failure of cold rolls can be divided into spalling caused by surface damage and spalling caused by internal defects.

In recent years, due to the use of advanced metallurgical techniques such as out-of-furnace refining and electroslag remelting for cold-rolled forging billets, and the use of ultrasonic non-destructive testing during the manufacturing process, the defects and inclusions in the working layer of cold-rolled rolls have been strictly controlled. Therefore, the proportion of spalling caused by internal defects of cold rolls is constantly shrinking, and with the improvement of product performance and the deterioration of rolling conditions, the spalling caused by surface damage is increasing [3-4]. At present, as the strength of cold-rolled products is getting higher and higher, the stability of the rolling process is relatively poor, and the rolls are inevitably damaged during the use of the machine. If they are not removed in time for replacement and grinding to eliminate defects, Cracks, peeling and even roll breakage will occur, directly affecting production. Therefore, a comprehensive and in-depth analysis of roll spalling failure is helpful to summarize experience in roll use and maintenance, and reduce accidental loss of rolls; at the same time, it is also conducive to optimizing the material selection and manufacturing process of rolls, so that the rolls are more in line with the product. And the development needs of craftsmanship.

After the lower work roll of the G1 stand of a cold rolling production line was used off the machine, the roll surface cracking and large-area peeling occurred suddenly on the assembly roll stand. The macroscopic appearance of the peeling is shown in Figure 1. Before the roll failed, it was normally used on the machine once. The rolling time was about 14 hours, the cumulative rolled strip length was 104 km, and the current roll body diameter was 396 mm. 917 mm (normal scrap roll diameter 385 mm), there is still an effective working layer of nearly 6 mm. The main peeling area is about 700 mm away from the end of the drive side roller, the peeling surface reaches 460 mm in the axial length, nearly 200 mm in the circumferential direction, and the depth is 12 to 15 mm from the roller surface. According to experience, it is located at the end of the work roll and the core. Transition zone. In order to clarify the cause of the large-area peeling on the roll surface, the failure area of ​​the roll and the sample of the peeling block on the roll surface were analyzed, and the microstructure and crack morphology of the peeling block were observed by a metallurgical microscope and a scanning electron microscope, and direct reading was adopted. The spectrometer examines the chemical composition of the working layer of the roll, and uses a microhardness tester to test and analyze the hardness of the effective working layer of the roll. Finally, it is carried out from multiple angles such as the fracture observation of the spalling surface, the analysis of the working layer structure, the depth analysis of the hardened layer, and the crack propagation analysis. Comprehensive analysis and research to clarify the cause of failure. 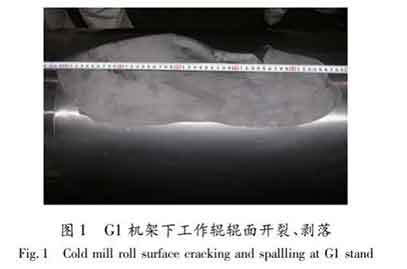 The appearance of the exfoliated blocks produced by the failure of the roll surface spalling is irregular, as shown in Figure 2. Since the rolls are made of high-carbon and high-alloy cold work die steel, most of them have the characteristics of brittle cracking. Fatigue crack growth zone and instantaneous fracture zone can be seen on the main fracture. The surface of fatigue crack propagation zone is smooth with fatigue crack propagation stripes. Clear crack propagation radiation (blue line) can be seen in instantaneous fracture zone. According to the characteristics of the fatigue growth arc, the crack source can be found in the center of the circle where the arc points in the opposite direction, that is, the area shown by the red arrow in Figure 2. 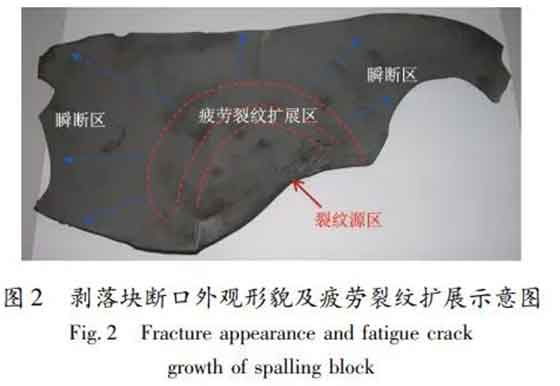 Take the peeling block on the roll surface and analyze the chemical composition. The results are shown in Table 1. The results are basically in line with the chemical composition range of conventional MC5 cold-rolling work rolls. The harmful elements of P and S are well controlled. The content of Ni and Mo elements is low, but V element is not detected. (In conventional MC5 materials, wNi = 0.3% to 0.5%, wMo = 0.2% to 0.6%, wV = 0.1% to 0.2%). However, the low alloying elements mentioned above may have an impact on the wear resistance and other service performance, and will not substantially affect the accident resistance performance of the roll. 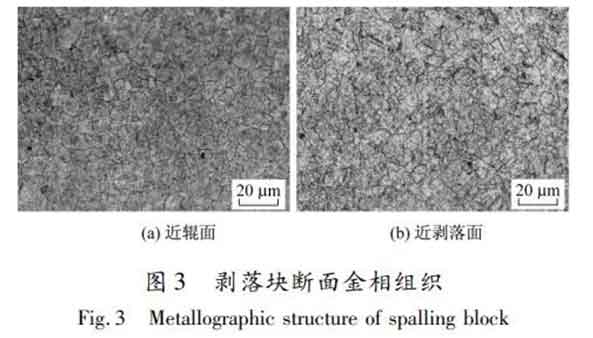 The cross-sectional hardness distribution of the peeling block was tested along the radial direction of the roll, and the test result is shown in Figure 4. It can be seen from the test results that the hardness of the exfoliated block gradually decreases with the increase of the distance from the roll surface, until the hardness (HV) of the part 6mm away from the roll surface is 700 ~ 710, and enters the transition zone of the hardened layer, and the depth of the working layer meets the use of the roll. skills requirement. 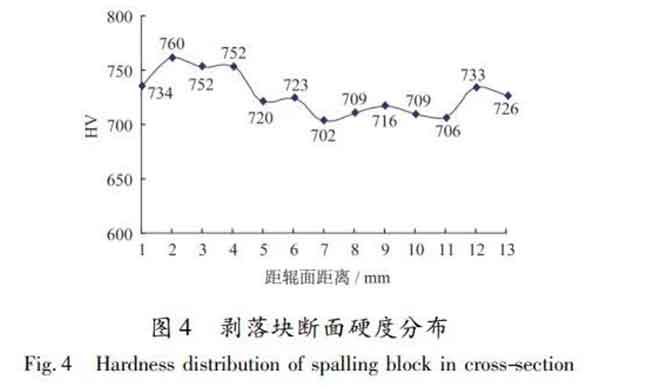 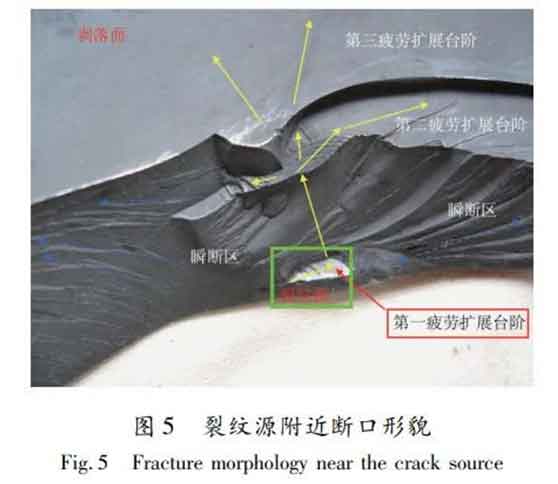 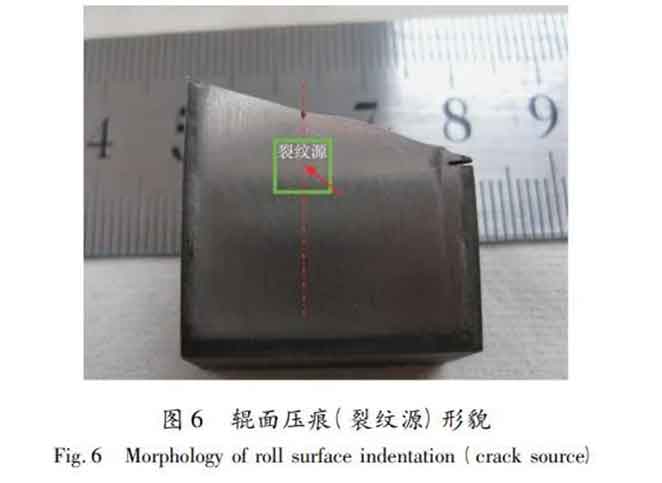 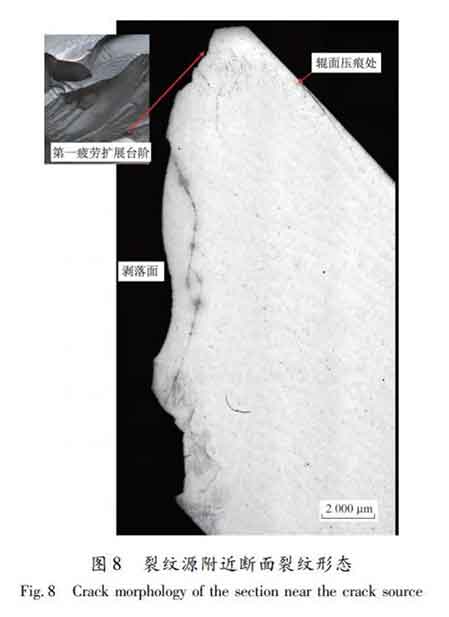 The fracture morphology near the crack source is enlarged as shown in Figure 5. The first fatigue growth step and the second fatigue growth step are clearly visible at a depth of about 2, 10 mm from the roller surface. There are a large number of dense fatigue crack growth streaks, and fatigue crack growth The process is shown by the yellow line in the figure. Check the roller surface in the green box in the figure, and find a roller surface indentation with a length of less than 0.5 mm, as shown in Figure 6. Scanning electron microscope was used to observe the indentation in detail, and it was found that there was a crack at the root of the indentation, as shown in Figure 7. The indentation is preliminarily determined to be formed by the falling and rolling of foreign matter in the rack, and abnormally adhered strip steel along the circumferential direction of the roll surface at the edge of the indentation, which is abnormally formed during rolling during the accident. Therefore, it is judged that the crack should cause the roll to peel off. The source of cracks. Cut the specimen along the red dashed line in Fig. 6 with wire cutting to observe the crack propagation morphology of the section, as shown in Fig. 8. It can be clearly seen that the cracks are fatigued from the roller surface at a small angle first, and then divided into multiple strips to expand along the grain to the first fatigue growth step of the spalling surface. After that, the cracks are further widened and lengthened, and the fatigue growth area is enlarged, forming the figure 5 In the second fatigue expansion step, after the roll is normally put off the machine, the internal stress of the roll is redistributed, causing instantaneous instability, rapidly expanding to the surrounding and roll surface, forming a large area of ​​instantaneous fracture zone and roll cracking in the fracture. The above process is in line with the typical surface crack-induced spalling process. The schematic diagram is shown in Figure 9. It contains four typical steps: surface crack formation, crack inward propagation to the hardened layer, fatigue crack extension along the hardened layer, and formation of tear brittleness Flaking.

This paper conducts a more in-depth analysis and research on the large-area peeling failure roll from multiple angles such as the fracture surface of the peeling surface, the working layer structure, the depth of the hardened layer, and the crack propagation. The depth of the hardened layer is normal, so it is clear that the large-area peeling failure of the roll is caused by fatigue crack propagation. The source of the crack is that the foreign matter in the stand falls and rolls into the indentation during the rolling process, which leads to the roll surface crack. At present, as the strength of the plate and strip products is getting higher and higher, the rolling conditions are becoming more and more complicated, and the process stability is getting worse and worse. The rolls are inevitably damaged by the impact of the roll surface during the use of the machine. How to better ground This kind of problem will be an important research direction of roll use technology.

It is suggested that work can be carried out from the following three aspects:

(2) Improve the roll maintenance system, check the full roll surface of the rolls that are replaced under the machine, and confirm the damage of the roll in service. Once an abnormality is found, the use must be suspended, and the cause should be analyzed or the defects can be eliminated through the grinding process to make the roll Return to normal