Description: Regarding the corrosion mechanism of ordinary steel slag on magnesia-carbon bricks, many studies have been carried out in China and on abroad. It is generally believed that the dissolution of MgO by molten slag and the oxidation of carbon in bricks are the main reasons for the damage of magnesia-carbon bricks.

The sample uses large crystalline fused magnesia and large flake graphite (see Table 1 for the main chemical composition) as the main raw materials, thermosetting phenolic resin as the binder, and 4% Si powder and Al powder. Under a pressure of 180 MPa, the mud was pressed into a sample of 25 mm × 25 mm × 125 mm, which was heat-treated at 240°C for 9 hours for use. The volume density of the obtained sample is 2.99 g·cm-3, and the apparent porosity is 4.7%.

The particle size of the test slag is <0.5mm, and the main chemical composition is shown in Table 2. Among them, slag A and B are steel slag containing vanadium and titanium from the Pan Steel site, D is ordinary steel slag from other steel plants, and C is artificial slag synthesized from slag D and chemically pure V2O5. The serial number of the corroded sample is consistent with the serial number of the test slag used.

The test was carried out on an intermediate frequency induction furnace. The schematic diagram of the device is shown in Figure 1. Put about 8kg of A3 steel and about 200g of test slag in a graphite crucible, energize and heat, and after the steel and slag are all melted, immerse the sample in the crucible to a set height. Add about 50g of test slag when the test is carried out for 10 minutes. The erosion time is 20 min, and the temperature of the molten pool is controlled at (1650±30)℃. Observe the shape of the sample after erosion. After removing the dross, cut the sample about 20mm away from the end of the sample, measure its cross-sectional area, and calculate its melt loss index: (1-residual brick cross-sectional area ÷ original brick cross-sectional area)×100% to characterize the sample The erosion situation. The microstructure of the remaining bricks was analyzed by scanning electron microscope. 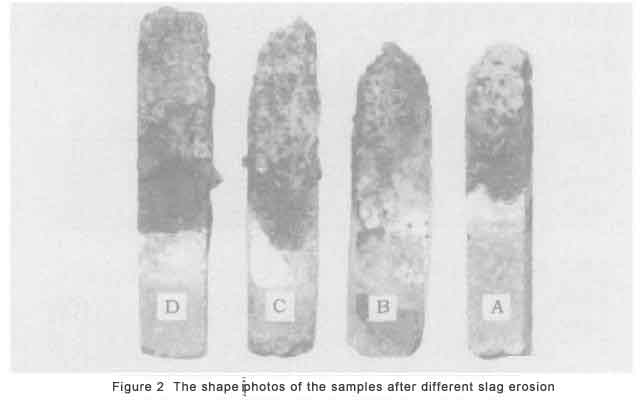 Table 3 shows the melt loss index and penetration layer thickness of the samples after different slag erosion. It can be seen that the corrosion ability of vanadium-containing steel slag on the sample is significantly higher than that of ordinary steel slag. The melting loss index of the sample basically increases with the increase of V2O5 content; the penetration depth of different slag in the sample is from large to small The order is A>C>B>D, that is, the thickness of the permeable layer increases with the increase of the V2O5 content in the slag. It is known from Table 2 that the basicity (CaO/SiO2) of A slag is 2.2 times that of D slag, and the Fe2O3 content is also lower than that of D slag. According to common sense, A slag should be less corrosive to magnesia carbon bricks than D slag.

Figure 3 shows the comparison of the microstructure of the sample after corrosion by vanadium-containing steel slag and ordinary steel slag.

Figure 4 shows the microstructure of the sample B reaction layer. It can be seen from the figure that the remaining MgO particles in the reaction layer are wrapped by the liquid phase, and the edges and corners disappear, indicating that the erosion of the MgO particles by the slag is surface dissolution. The bright white phase in the figure is the Mn-Fe alloy particles formed after FexO and MnO are reduced. EDS analysis showed that the main components in the slag were CaO, MgO, Al2O3, and SiO2, mainly in the form of C2AS and C3MS2. A small amount of C3S and C3A were also detected in the matrix; in addition, TiCVC was also found at the edges of metal particles. And Ti-V-Fe alloy. The energy spectrum analysis results of each micro-region in the figure are shown in Table 4. The analysis of samples A and C also found similar results. 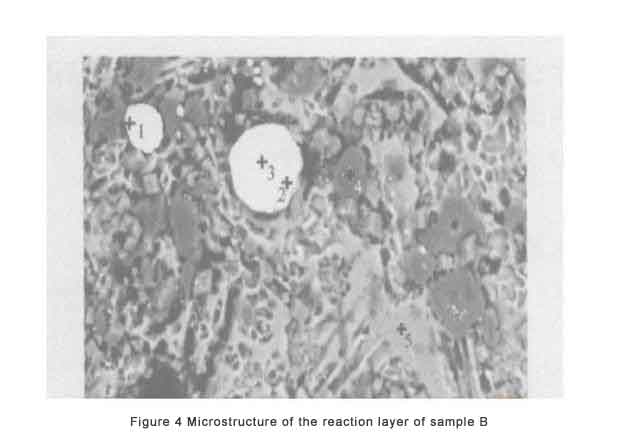 Figure 5 shows the ground scanning result of the permeable layer of sample B. It can be seen that V2O5 and TiO2 enter the brick with the slag, mainly in the edges of the magnesia particles and the matrix. Observed at high magnification, the morphology of the magnesia particles is similar to that of the reaction layer. The graphite has completely disappeared where a large amount of slag infiltrates in the matrix, leaving only breccia-like voids (>500μm) and a few round pores of 10-20μm. Where there is a smaller amount, there is graphite residue; there are more bright metal particles (5-15μm) in the matrix. Energy spectrum analysis shows that the main components of the slag are CaO, MgO, Al2 O3, and SiO2 in the form of C2AS and C2MS2; the metal phase is composed of Mn-Fe alloy, with TiCVC phase at the edge, and the micro-domain composition is C46.84 %, Ti9.54%, V39.25%, Fe4.37%. 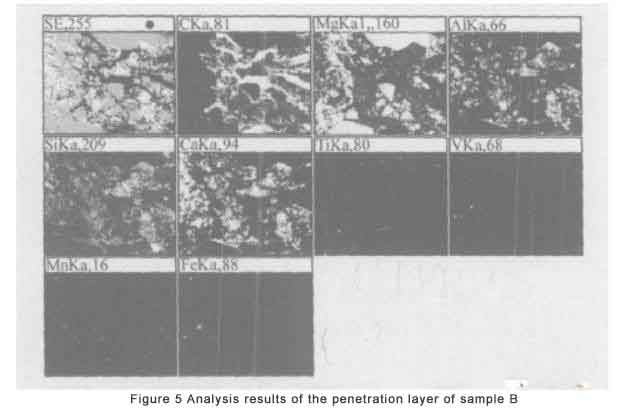 In summary, since vanadium-containing slag has a lower melting point and viscosity than ordinary steel slag, V2O5 in the slag reduces the melting temperature while greatly reducing the wetting angle between the slag and the refractory material. Therefore, it is not only better It easily penetrates into the matrix of magnesia carbon bricks, causing carbon oxidation and surface dissolution of MgO particles. It can also penetrate into the grain boundaries of MgO particles and react with the grain boundary binding phase to form a low melting point phase, causing the dismemberment and dismemberment of magnesia particles. Flaking. The VC and TiC generated by the decarburization reaction can inhibit the further deepening of the slag to a certain extent.

Compared with ordinary steel slag, vanadium-titanium-containing steel slag is more corrosive to magnesia carbon bricks, and the corrosion ability increases with the increase of V2O5 content in the slag. On the one hand, V2O5 and TiO2 in the slag penetrate into the matrix of the magnesia-carbon brick with the slag through the pores, and react with carbon to form VC and TiC. The carbon content in the matrix is reduced and the matrix structure is destroyed. On the other hand, molten slag can also penetrate into the magnesia grain boundaries, react with the grain boundaries to dismember the magnesia particles, thereby accelerating the damage of MgO-C bricks.