The ladle slag line is the part where the molten steel is in direct contact with the air. At present, magnesia-carbon bricks are mostly used in the masonry of the ladle slag line. Due to the existence of temperature difference and oxygen-enriched environment, the erosion rate of this part is significantly faster than that of other parts. The tipping and slag discharge operations during operation cause great damage to the slag line, so the ladle slag line is one of the most frequently repaired parts. 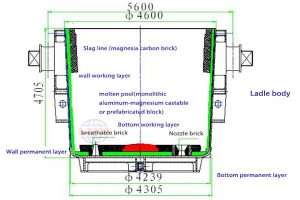 The service life of the ladle slag line is mainly affected and restricted by the external environment, the quality of the refractory materials, and the masonry method.

LF refining slag is easy to causes oxidation and decarburization of magnesia-carbon bricks. LF slag has low viscosity at high temperatures, strong penetration ability in the decarburized layer, and high solubility for magnesia. The magnesia particles are dissociated at the grain boundary of periclase, as shown in Figure 2 (SA is slag; TA is the intersection of three blocks). Therefore, the service life of LF slag line magnesia-carbon bricks is relatively low. Shen et al. systematically studied the damage mechanism of ladle magnesia-carbon bricks in the LF refining process, indicating that the smaller MgO grain aggregates are easily eroded by high-temperature slag, and the slag will continue to infiltrate along the periclase grain boundaries after erosion. Inside the MgO aggregate, eventually causing the cleavage of the periclase aggregate. 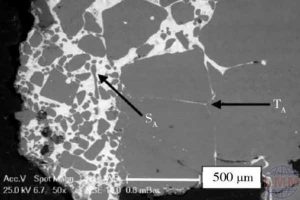 Magnesia-carbon bricks have different damage and erosion mechanisms in different service temperature areas in the ladle and their own internal structures, resulting in different damage and erosion mechanisms. In the decarburized layer, the wettability of the slag and the magnesia-carbon brick at high temperature is better and the tendency of MgO to dissolve into the slag is greater. Compared with the low-temperature area near the airside, the magnesia-carbon brick is more seriously eroded by the slag. In addition, the slag removal and repair operations performed by the ladle will inevitably cause artificial damage to the ladle slag line. Vibration and accidental injury will cause a certain degree of damage to the ladle slag line. Although this damage has little impact on the overall quality of the slag line, it will still increase the maintenance frequency of the ladle slag line.

When the ladle receives molten steel from the converter, it will be accompanied by a large amount of steel slag. The low melting point 2CaO·SiO2 in the steel slag dissolves in the MgO grain boundary and chemically reacts with the trace impurity elements in the MgO layer, which plays a major role in the dissolution of magnesia refractories. From the perspective of converter slag, the research on the performance improvement of magnesia-carbon bricks mainly focuses on magnesia, antioxidants, and microstructure.

In addition, the addition of antioxidants in magnesia-carbon bricks also affects its quality. In order to improve the oxidation resistance of magnesia-carbon bricks, a small number of additives are often added. Common additives are Si, Al, Mg, Al-S, and Al-Mg. , Al-Mg-Ca, Si-Mg-Ca, SiC, B4C, BN, and Al-B-C and Al-SiC-C series additives, the role of additives mainly has two aspects: one is from the point of view of thermodynamics, in the At the working temperature, additives or additives react with carbon to form other substances. Their affinity with oxygen is greater than that of carbon and oxygen, and they are oxidized in preference to carbon to protect carbon. On the other hand, from a kinetic point of view consider the compounds generated by the reaction of additives with O2, CO, or carbon to change the microstructure of carbon composite refractories, such as increasing the density, blocking pores

It hinders the diffusion of oxygen and reaction products, etc. [28]. At present, Al powder is mainly used in magnesia-carbon bricks to prevent the oxidation of carbon. Although Al has a strong anti-oxidation ability, at high temperatures, Al reacts with C and N2 to form Al carbon and nitrogen compounds. Al carbide is prone to hydration from high temperature to low temperature, resulting in the formation of voids inside the magnesia-carbon brick, resulting in loose structure and cracks. In view of this situation, some domestic refractory manufacturers have used powder, silicon powder, and carbon powder as raw materials to prepare AI4SiC4 powder in a vacuum sintering furnace and used it as an antioxidant in magnesia-carbon bricks to study its resistance to magnesia-carbon bricks. The effect of oxidation performance found that AI4SiC4 not only has strong antioxidant performance but also can avoid the problem of hydration cracking existing in traditional antioxidants.

Ladle slag line magnesia-carbon bricks generally use dry laying (directly stacking bricks, without fire clay bonding) and wet laying (using fire clay combined with refractory bricks). Influence, at high temperatures, due to the different materials of magnesia carbon brick and fire clay, the thermal expansion rate is different due to the influence of temperature, and it is easy to create gaps in the contact surface. The disadvantage of this method is that 100% close contact between magnesia-carbon bricks cannot be guaranteed. At the same time, when magnesia-carbon bricks are heated and expanded, there is no room for buffering between bricks, which will cause bricks to be squeezed and broken; or due to magnesia-carbon bricks. The carbon brick expands, the whole ring of slag line is lifted as a whole, the huge extrusion force deforms the package along with the plate, and the refractory material loses its protection and is washed and peeled off, which poses a great threat to the quality of the slag line. 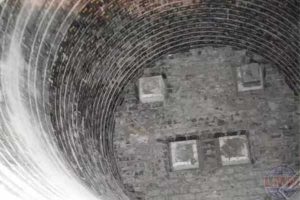 The wet laying method is similar to the building method, except that the requirements are stricter. The advantage of this method is that it can avoid the possible gaps in dry laying. When magnesia-carbon bricks are heated and expanded, flow can be generated to adapt to the change of the gap between the bricks, dispersing the extrusion force between the bricks, thus avoiding the generation of gaps. The disadvantage of this method is that the use of fire mud makes the structure of the slag line in an unstable state, and at the same time increases the difficulty of masonry. If the fire mud is not uniform, there will still be gaps between the bricks.